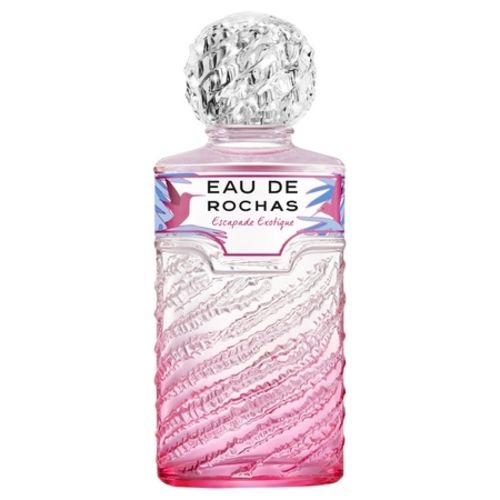 Eau de Rochas is an iconic perfume that has never ceased to reinvent itself and conquer the hearts of the public, since its very first creation in 1970. Year after year, Eau de Rochas is metamorphosed , taking on more or less opulent airs. , taking on freshness or even sensuality. Nevertheless, since 2016, Rochas has made a habit of developing a special edition limited to the summer season. These ephemeral perfumes are the delight of collectors and are brought together under a collection called Escapades de Rochas. Once again, in 2019, Rochas is giving us one of its sun and summer juices. This time, its new composition is called Eau de Rochas Escapade Exotique.

First, let’s start by presenting to you the previous Escapades de Rochas which have already flooded our previous summers. It all began in 2016, with the creation of Eau de Rochas Escapade en Méditerranée , a perfume with a luminous heart, playing on the contrast between a very fresh and tangy start, and a warmer background. Then, in 2017, Eau de Rochas Escapade Estivale sparkled with a fruity lemonade accord based on a sweeter orange blossom, and a woody and amber base. Finally, the last Eau de Rochas Escapade Tropicale of 2018, emphasized a vegetal and lush heart, enriched with fruity flavors of mango, blackcurrant and raspberry.

This time, more than ever, Rochas has chosen to take us to a distant land. The time has come for exoticism and Rochas invites us to pack our bags, bound for a paradisiacal beach. L’Eau de Rochas Escapade Exotique is inspired by an island warmed by the sun, bordered by white sand and struck by the sea waves. Thus, the scent of this new perfume combines warmth and freshness. In contrast, this juice draws its energy from a generous load of fruit. It all starts with a trio of orange, blackcurrant and apple. Then, this green and sparkling flight is relayed by a more aquatic and feminine heart. Opulent jasmine intertwines with melon and watermelon. Little by little, the Eau de Rochas Escapade Exotique warms up. This fragrance ends with an alliance of cedar and ambroxan, further enhanced by a more animal and erotic musk.

Rochas chooses to dress its bottle with a very feminine gradient

On the bottle side, Eau de Rochas Escapade Exotique reappropriates the visual of its predecessors. Its bottle forms a thick cylinder of glass, to which no one can really give an age. It seems carved out of the waves. A ripple emerges on its surface, diagonally, as if this bottle had been born from erosion. Its top is overlooked by a crystal sphere, similar to a transparent quartz. The only real novelty: a very feminine pink color appears on its base. Likewise, birds of paradise, emblems of exotic islands, are drawn on its label.